If you had strolled down Tha Pae Road, one of Chiang Mai’s main thoroughfares leading from the Mae Ping River to the eastern Tha Pae Gate, just a year ago, you may not have noticed the towering yellow building now known as the Kiti Panit General Store restaurant.

Worn, weathered and hidden behind temporary souvenir stalls, the 130-year-old mansion, which had served as the city’s first general store dating back to 1888, was derelict and uninhabited for 50 years. That is, however, until renovations started taking place in May 2019 to restore the building back to its former glory. Though empty for decades, the site is actually owned by fifth-generation descendants of the original owners, including restaurateur Rungroj ‘Tao’ Engkuthanon. After teaming up with fellow restaurateur, Frédéric Meyer (who’s also behind Issaya Siamese Club and Saawaan in Bangkok), the idea was to turn the old store into a new restaurant while still holding on to its past roots.

Revealing a Hidden Gem
When the time came to start the project, Tao looked to the past to inspire the future. Wanting to restore the building back to its initial appearance as much as possible, he began by going to local historical and photo archives trying to find mentions of the building. The key to unlocking the building’s story, however, was hidden within the old walls themselves, where boxes of photos, ephemera and artefacts from the mansion’s different iterations as a general store, salon and medical clinic laid untouched. Even more fortuitous was the fact that Tao’s great-aunt was the wife of the clinic’s doctor and, at 93 years old, is an avid storyteller who could recall many details about the illustrious site.

Contractors from both Bangkok and Chiang Mai worked to renovate the structure. The ground floor had weathered significant destruction due to humidity and water damage but, fortunately, the upper story was in unusually good condition, boasting what turned into an elegant reception hall with 7-metre-high teak ceilings and twin staircases. Steel beams were added to reinforce wooden pillars but much of the restoration work centred around cleaning up and exposing the building’s innate beauty.

When Tao said he aimed to keep the building as original as possible, he meant it. Outside, the striking golden exterior hue is reminiscent of the original paint colour, while inside the furniture and decor all come from the site itself. Family photos and antiques line the walls and cabinets with tables made from leftover, salvaged wood. In the charming back courtyard, carved wooden details accent the railings and doorways as emerald green lamps, also found on site, hang once again to light the way. Upstairs just outside the entrance to the private dining area, one can even spot traces of children’s drawings on the walls.

Celebrating Northern Thai Cuisine
In this old yet renewed setting, a new generation can now appreciate one of Chiang Mai’s most distinguished heritage buildings as they enjoy delicious regional specialities in an upscale yet inviting environment. The renovation was just one part of Kiti Panit’s recent reincarnation. While restoring the building’s architectural integrity, the rest of the team, including the dynamic chef duo Sujira ‘Aom’ Pongmorn and Arisara ‘Paper’ Chongphanitkul from Michelin-starred Saawaan, created a dining experience focused on sharing Lanna (northern Thai) and Tai Yai (Shan) inspired recipes with contemporary touches. Dishes such as Pat Pet Moo Pa Bai Jun (stir-fried wild boar spiced with curry and cumin leaves), Yam Bai Cha Mur (fermented tea leaf salad) and the northern favourite, Nam Prik Ong (a roasted red chilli relish with tomatoes and minced pork) adorn the menu. Though these flavourful dishes are enough on their own, each dish is prepared or presented with a particular flair one would expect from such a high calibre creative team. The common Thai dessert of mango and sticky rice, for instance, is elevated with grilled, caramelised mango and a passion fruit-infused palm sugar sauce in addition to the typical pandan-flavoured sticky rice and coconut cream.

All dishes are made to share, offering an even greater treat for the tastebuds as diners select different tastes and textures to make up their meal. To top it off, a selection of housemade fruit sodas, iced teas and tempting cocktails quench one’s thirst.

Though Chiang Mai has long been known for its array of eating options, it surprisingly isn’t home to many restaurants that can truly be considered unique both in regards to what they offer or their connection to the location. Kiti Panit General Store has managed to blend history, architecture, cuisine and service in such a way that both invokes a deep sense of place as well as offers a distinct experience that couldn’t be possible anywhere else. 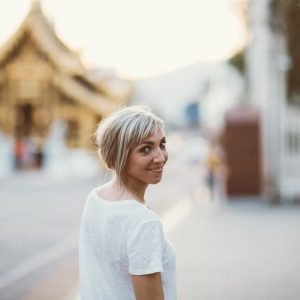 Calling Chiang Mai home for the past eight years, Alana Morgan has shared her Thailand travel secrets writing for various travel outlets such as Lonely Planet, National Geographic, inflight magazines and her blog Paper Planes. When not travelling, she works as a copywriter for Thai businesses through her company, Morgan Media. Follow her on Instagram at @paperplanesblog.