When our notorious 'Chef Van' Chalermpon Rohitratana brings folk cooking style and local ingredients back to the city.

“Van” Chalermpon Rohhitratana, a laid-back chef and founder of “Escapade Burgers & Shakes” and the Thai restaurant “Rarb” on Phra Athit road, has opened a new restaurant with his friends called The Dag at Warehouse 30.  Van is part of a new generation of chefs who seek to revive the trend of using local cooking methods and regional ingredients in the big city. Although once known for his aggressiveness on social media, today the Chef Van we chatted with is very much sober. His words still poke fun, but his ego has evolved. What has life taught this fiery chef? Let’s see what he has to say about it.

As head chef and restauranteur, Van shared with us his latest approach on life and creativity. “My life at the moment is focused on living with unhappiness in the most amicable way possible. Because according to Buddhist teachings, that’s what life is. We’ll always have temptations, whether they be big or small.  For this talented chef, befriending unhappiness likely means allowing himself to enjoy each day a bit more. “My new restaurant is called “Dag” (“eat up”), because the message is, whatever we have available today, just eat it up (laughs). The longer I work, the less picky I get. Like today, I have good fish, so I’m cooking fish. Tomorrow I’ll have good pork, so I’ll cook pork. But I still focus on healthy dishes made with organic ingredients.”

Chef Van said that back then, he began cooking and started his business purely out of love. As a person who has to cook and run a business at the same time, he has now adjusted his mindset to allow him to live in reality in a way that is true to both himself and others. “I have to make a living like everyone else. I have responsibilities, and I need money. Even if I’m doing something I love, I’m unhappy. There was a time when I lost all hope and sat there asking myself, what next? Is this all life has to offer?”

We all need some direction in life to push us forward. When he was younger, Chef Van wanted to build a successful restaurant business. He wanted his business to thrive, become famous, and make money. “But when I made it to that point, I reached a dead-end. I didn’t have any other purpose left for me. That was two years ago.”

The young chef took a little over a year after that to rediscover his stance on life. He says with pride that what he wants to do with his business and career today is ensuring that every dish is “safe.” Not all the ingredients have to be organic, but the “ingredients” and “cooking process” have to be made safer and healthier for diners.

“From now on, my focus will not only be making food that is delicious, but food that just as safe as it is tasty.”

This awareness has encouraged Chef Van to reshape his way of working. “I used to think that a great chef needs to think harder, try harder, and do more than the average person. But I now realize that the excessiveness I’d absorbed from Western thought systems were the source of all my problems. The new concept for my career is…to create food with whatever I have right now.

Chef Van shared with us that his trip to Doi Ang Khang two years ago was a life-changing experience. With every minute that passed by on that mountain, the bold Chef Van of Bangkok began to see the seeds that King Rama IX had sowed for the Thai people and how deeply it affected their lives.

“The Royal Agricultural Station has everything I’ve seen on Western cooking shows. The fruits and vegetables that I had to buy at such high prices were all available there. The prices were unbelievably cheap. Most importantly, there were smiles all around. The people there worked together. They shared what was left over. They don’t compete with one another. They’re not greedy.” On that trip, Chef Van met with Rittee Bunnag, grandson-in-law of His Serene Highness Prince Bhisadej Rajani (President of the Royal Project Foundation), who told him about the origins of the Royal Agricultural Station dating back many decades ago. “According to Rittee, Prince Bhisadej didn’t know anything about agriculture, and that was the precise reason why King Rama IX assigned him to the project. King Rama IX said that those who know nothing will always listen to others.”

Chef Van has always wondered why Thai cuisine continues to remain stagnant. While global discussions are getting hyped about molecular gastronomy, why are Thais not adapting the science to local dishes? “The more I learn about Thai food, the more crowded my head gets with why, why, and whys.”

These questioning habits of his have propelled Chef Van to continue experimenting with new elements within the kitchen space. “I like to design food based on scientific theories. Sometimes the food made by Michelin chefs are nothing fancy but are super tasty. That’s why their dishes can sell at the prices that they do. But why don’t Thai people apply those scientific theories with pad thai or shrimp paste?” The reason he asks this is because he has tried it himself and found that scientific theories can help simple ingredients reach the heights of the perfect taste.

Once, Chef Van and his friends were invited to watch a “liquor brewing” process at a wooden house in Mae Hong Son. It was that night that he pondered to himself why he had never learned the simple skills he witnessed. “The villagers have less kitchen equipment than I do, but they can easily start a fire on the floor of their house without burning the house down.”

Once the brewing was done, it was time for tasting. The villager who invited them over asked the chefs if his liquor tasted good. “I answered, I don’t know what you mean by good, because people have different notions of what tastes good. The villager cracked a loud laugh and repeated his question…well, does it taste good? Something lit up inside me then.”

“Tasty or not, a simple taste will tell…why complicate things?” 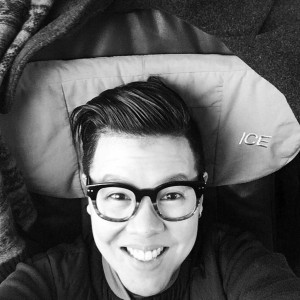