A bond between two family members generations apart was gradually forming through adventures, literature and photographs taken on film camera.

“The vastness of the Norwegian landscape—and its powerful, mythological quality—possesses an extraordinary ability to show us as much beauty and as it can cruelty. In its extremes, nature humanizes us. And it is this thematic link that would bind us both.”

At first, I thought it was just another photo exhibition. But after experiencing it for myself and discussing its background and concepts with the behind-the-scenes team, I realized I couldn’t have been more wrong. This is an intimate story of two family members told through overseas journeys taken a century apart, in which brutality is enveloped by natural beauty. It was against this backdrop that this photo exhibition, “Hundred Years Between,” was held, where photos taken on film camera by Than Phu Ying Sirikitiya Jensen, more commonly known as Khun Mai, in Norway became one of the highlights of the 2020 Bangkok Design Week, and deservedly so.

Kooper sat down for a talk with Khun Mai on the morning of 4 February, when the sun was still warm. She showed us around the old Customs House and her personal photo exhibition, paying attention to every detail in it.

Back in March 2019, Khun Mai received an invitation from the Thai Embassy in Oslo to create a project celebrating 115 years of diplomatic relations between Norway and Thailand.  She then decided to retrace King Chulalongkorn’s royal visit to Norway (his second Europe visit in B.E. 2450) and wrote four very personal letters to her late great-great-grandfather.

“After accepting the invitation to work in this project, I began to learn more about King Chulalongkorn in great detail, through discussion with Thai historians and by reading his travel memoir, ‘Klai ban’ (Far from Home), which he wrote to Princess Nibha, one of his closest daughters. Because he was a great king, a notable historical figure, many people only see him in political contexts, for his role in modernizing Siam and bringing technologies to the country. But for me, after reading his memoir, what I felt was that he may have been a king of a nation, but he was also human just like the rest of us. This was a side to him that few people ever got to see.

There were moments when he was vulnerable, moments when he was missing his loved ones. He wrote in one of his letters, “I miss home.”  Or on 12 July, just before he ascended the North Cape, he was scared and wondered if he would be able to hike up there. This was what got me thinking in a completely different direction. What if I were to bring out his human side, from when he was not only struggling against the greatness of nature but also struggling against his own fears. I thought that would breathe life into this exhibition, by expressing emotions that most people can understand and relate to.”

“Through these letters and photographs, I am striving to find a connection between our respective experiences in a foreign land so far from our own. Not as a historian or photographer, but as one of your descendants.”

Nineteen landscape pictures taken on film cameras were on display at the exhibition, atmospherically portrayed the beauty and greatness of nature with a dialogue wisely added to connect with the audience on an emotional level.

“Base on my interest in humanity and study in anthropology, I wanted the exhibition to recount the connections between King Chulalongkorn’s and my journeys from various angles, including time, space, and people. It was to find a linkage between the experiences encountered by the king and my own.”

Jaitip Jaidee, Khun Mai’s trusted exhibition designer, gave us another interesting insight. According to her, a very crucial question while designing this exhibition was how to get the photos to talk to the letters.

“Here, in Norway, I have felt both dwarfed and exposed in this vast expanse of nature. I have grown to see it as something much larger than myself, and at the mercy of the elements, I am humbled.”

The above message appeared in a letter Khun Mai wrote to her late ancestor. “There were stories hidden in the conversations both of them had with local people. I think what she wrote to King Chulalongkorn was a dialogue between people who never met, but who understood each other profoundly.” Jaitip explained.

This was why Khun Mai and Jaitip both agreed to display all the photos in the largest print size available “we want to make visitors feel enveloped in the mysterious hazy ambiance as if they were traveling with Khun Mai in Norway,” said Jaitip about the design of the exhibition.

In B.E. 2450, a native inhabitant on Torghatten said to King Chulalongkorn: “Among the islands here, ours is unrivaled. We have more green grass than anywhere else. We can raise up to six cows, which give us all sorts of dairy products. That’s more than enough.”

113 years later, Hans, a new Norwegian friend of Khun Mai’s said to her: “I’ve been here my entire life. Everything has its own balance point. Breathtaking beauty and brutality of nature – there cannot be one without the other. This is what keeps the world going.”

Visitors to “Hundred Years Between” by Than Phu Ying Sirikitiya Jensen would be left appreciating the fact that happiness and suffering always go hand-in-hand. The exhibition was held on 1-9 February at the old Customs House, a remarkable 136-year-old European-style building with a rich history. It was the last time the public was allowed to enter this historic landmark on the bank of Chao Phraya River, as it was set to undergo a major renovation for the next six years. 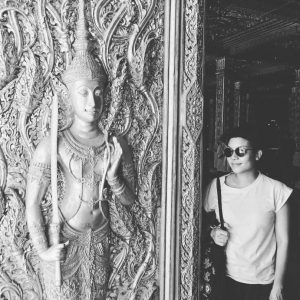